Touch switches are found in everything from smartphones and tablets to lamps and machines. The term “touch switch” refers to any type of electrical switch that requires touch to operate. Most touchscreen interfaces feature multiple touches switched embedded within the display. While all touch switches serve the same basic function, there are some subtle nuances between the different types. The three primary types of touch switches include resistive, capacitance and piezo.

A capacitance touch switch is unique in the sense that it requires just a single electrode to function. This electrode can be installed behind a non-conductive panel, including materials like wood, glass or plastic. It works by using body capacitance, meaning it detects the electrical charge produced by the human operator. Upon touching the interface, this electrical charge increases the capacitance and engages the touch switch.

A resistance touch switch requires not one but two separate electrodes to function — and these electrodes must be in contact with something conductive, such as a finger. Resistive touch switches work by lowering the resistance between two pieces of metal. When you place your finger across the plane, it turns on the switch. Consequently, removing your finger from the plate disengages the switch by turning it off.

A third type of touch switch is the piezo. Piezo touch switches receive their namesake from the piezo ceramic properties, which allow for bending. They are constructed behind a surface, allowing the switch to be integrated with nearly any kind of material. It’s also worth noting that piezo switches can work as an actuator.

So, which type of touch switch should you choose? There’s really no easy answer to this question, as it varies depending on your unique needs and how the switch will be used. Many people prefer capacitive touch switches because of their high accuracy and quality. However, resistive touch switches are a viable option to consider as well.

Piezo vs Capacitive Switches: What’s ...
Switches are found in nearly all electronic devices. While some of them are mechanical, though, others are touch-based. Two of ... 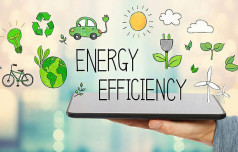 Improve the dual control program on E...
Perhaps you have noticed that the recent “dual control of energy consumption” policy of the Chinese government, which has a cer...